It's summer ! The workload is low, and boredom is settling in. A period when you want to try to do new stuff, but you need an objective.

Solution : searching through itch.io Jams to find something to work for, and FINALLY doing a jam I wanted to do for a long time : A Game By Its Cover.

A Game By Its Cover is a jam based on the Japanese Famicase exposition, displaying fake NES cartridges artwork made by artist from around the world.

It's a perfect mean to enjoy and appreciate art from talented artists and illustrators, that aims at making potential players envy at a fake game, and more importantly, make game designers like me want to create the game behind the cover.

I wanted to participate for years, and now, I'm really going to do it!

9th of July, day at work is slow, time to start the jam a few days late (not that it matters since this is a very chill jam, and I completely want to follow that philosophy making this game). So, before starting anything, lets define a simple goal.

Find a game concept that I know I can code and make art for from start to finish, to be made during my lunch breaks over a month

I don't have a huge experience in coding on Gamemaker Studio 2, but I know my way to make small test prototypes and toys. So making a "full" game would already be a challenge.

Let's start by finding a cover, the most pleasurable moment of the jam. You get to let ideas flow through your mind as you go through awesome and inspiring artworks. A great way to get your mind lost, but we've got to focus! There are hundreds of covers to go through...

After two days (or to be precise, two lunch breaks), I manage to shortlist everything down to 28 covers. Good, but not enough. There are a lot of different game ideas in this selection! Adventure games, mystery games, dog life simulations, 3D, 2D, isometrics,...
Many game concepts to get attached to...
But also a lot of game impossible to do in a month, especially alone with my current skill set.

Now comes the time of classifying those ideas, and trying to develop them a bit on paper to see if they are going anywhere. I'm now down to 8 covers. I check on Twitter if anyone had one of the idea I've had and started working on it, now I'm down to 6. 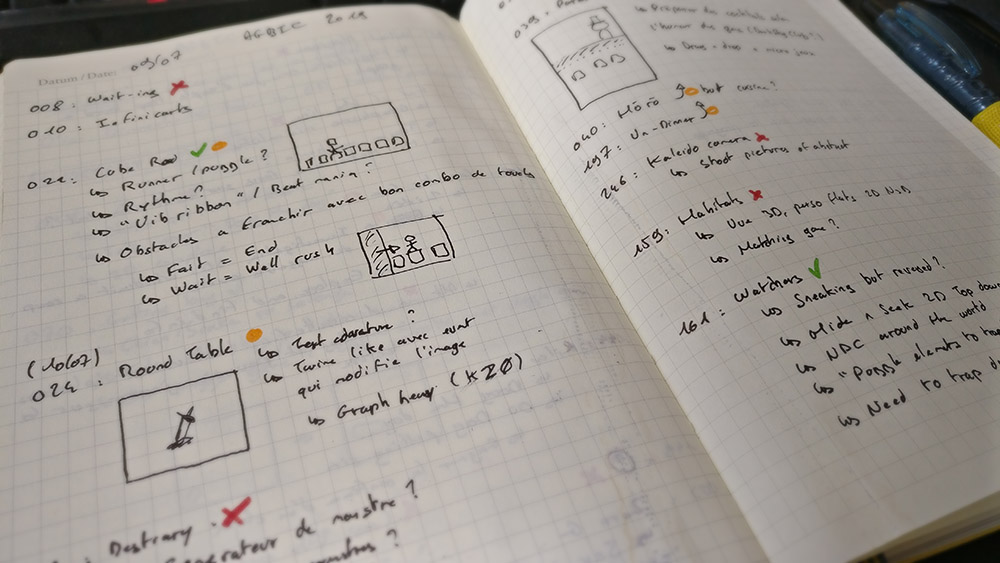 I just need to select one now, and go with your gut and starting to prototype. Let's open Gamemaker, and start this thing!

Watching the "Getting Long" cover, I had this idea:

- A physics game like "Noby Noby Boy" or "Katamari Damacy" where the player will play as a very long dog eating everything on its path avoiding enemies and obstacles to keep going.

The idea seems fun, the game loop is not completely defined, but can be simple enough ... The problem is physics, and most-likely 3D as in my mind.

However, playing as an animal that grows every time it eats reminded me of another game : Snake

The idea is growing! But I don't wat to make a snake clone, so I need to find something else to add ... Something that can also be simple to do ... And eureka.

- Snake: The character is moving on a grid and expands each time it eats
- The Witness: A series of labyrinth like puzzles with an expanding set of rules

I knew I would not be capable of making puzzles as complex as The Witness, but I knew I could quickly code the "3Cs" and slowly add some level design ingredients to expand level design.

You make ugly placeholders assets, with absolutely no style whatsoever, but you try to make things work, and easy to level design for.

I had to rewrite a lot of the collision and movement code, making many mistakes along the way, just to make sure everything works, even with ugly assets.

But as time goes, I knew my motivation was failing ... I knew I would be able to code the game, but I knew the project would fail when I would be creating art asset for the game...

Having friends is great

Before starting the jam, I talked about it on my workplace chat, on the dedicated channel for jams, thinking I would trigger some people to also make a game for the jam.

At this moment, Tara (IcedSnowMaiden) told me to ask her if I needed help making assets for the game I would be making.

So when I got hit by this realization, I asked her to help me out. Needless to say, the game is WAY prettier than I would have imagined to make.

Working with her also allowed me to think a bit more about what story could the game tell, going sometimes in weird direction for the fun of it! We were really close to give the game a dark tone by telling that Crumpet (the dog) was in fact, eating its master, and not crumpets, and that would be revealed throughout levels. This was scrapped because wee needed way more art, and we did not want to spend too much time on making this game.

And while I managed to make a few sound effects thanks to [Freesound](https://freesound.org/), I also needed a music for the game. Funny, and not annoying to listen when solving puzzles.

This is when Valden shows up. I went to him one day, asking him for help, knowing that he is a talented chiptune musician, hoping he would accept to make me a song.

The same day, in the evening, he sent me a message with a link to the music he just made. I download it, add it to the game, add a few dynamic integrations, and voilà. The music is in, and is a great addition to the project.

Now, two people have worked to help me do this game. I now have a real reason to not abandon the project. Not only for me, but by respect for their work for the project.

It's time for me to work. I painstakingly make levels, add a few more ingredients, and then, it is done. The game is now complete, and you can play it here :

The AGBIC jam is not an event where game are rated or even criticized by the community. The objective: Make a game, and have fun making it. No more, no less.

And for me, I reached my goal and this goal. I managed to code a game from start to end, with a few to little copy pasting code around (not that I tried to find a complete "Snake game tutorial" online). And thanks to Valden and Tara the game is far better looking and sounding that I would have ever though of for the time spent. And without their help, the game would add up to the abandoned projects stacking up on my computer.

Even if these numbers may seem low compared to game from experienced jammers, Getting Long was (and is at the time of writing this blog) my most downloaded and viewed game on itch.io, jam and student game included. (For comparison, *Illtide* only has 25 downloads, and 170 views ... Most of them coming after my previous post).

Now, I'm getting hyped up over game making, and slowly growing the confidence to get more into game projects! Making small and chill games, but also, try doing 3D...

All I need to do is brace myself and go try hard on Unity or Godot! Wish me luck!